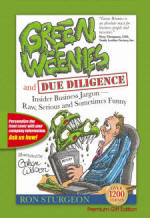 The disgusting term that started my word quest. When I first heard “green weenie,” I realized there was another language being spoken in the business world with mysterious words and acronyms, some funny ha-ha, some funny weird, some just wacky, some with hidden meanings and some downright offensive. Imagine what a weenie must look like when it is left in a refrigerator (which is unplugged) and forgotten for six months. A green weenie in business wheeling and dealing lingo is an unpleasant surprise discovered belatedly as part of a transaction or deal. If you discover at the end of your negotiations with a distributor that your would-be supplier was in bankruptcy a year ago, that’s a green weenie. If, during your due diligence, you discover that the receivables are much older than expected or that the revenues are recognized on an accounting basis that is unacceptable to the IRS, those are green weenies. The image calls to mind something that would likely cause food poisoning. Green Weenie is also the nickname of a Pittsburgh Pirates magic charm icon used to put hexes on opposing teams.

Use: “Chip learned three days before closing a merger that a huge delayed order of dealer returns was expected to arrive at the merger partner’s warehouse two weeks after consummating the merger, resulting in a post-closing write-off. That green weenie could kill the deal.”