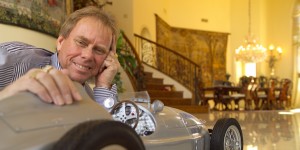 Ron Sturgeon is a successful entrepreneur and the author of How to Salvage Millions From Your Small Business and other books. After finding a following in the U.S., the book – which is now in its second printing – has been licensed and printed in Korea, China, and the Czech Republic.

Ron, whose rags-to-riches story began in the auto salvage business right out of high school, is a sought-after speaker and consultant for small business owners. In 2004, he was the keynote speaker at 3 international conventions, including two in Australia. His unique story of personal development and success is inspiring, and his motto is “mission possible.” He especially likes to speaking to students and other developing small business owners, sharing tips to his success, and challenging them to be whatever they want to be with his theme of “mission possible.” In addition, he has expanded his expertise to real estate development and is a noted collector of fine automobiles and antique toy cars.

Sturgeon seems an unlikely candidate to write the book, or even know the terms. His dad died when he was a senior in high school, and left to fend for himself with only a high school education, he went on to build one of the largest operations in his industry, the auto salvage business, which he sold to Ford Motor Company in 1999. He later founded and sold another business to a large public company, while building a small real estate empire, starting a small business consulting practice, and did two in-house over subscribed stock offerings. Throughout the last six years, he patiently gathered the terms found in the book.